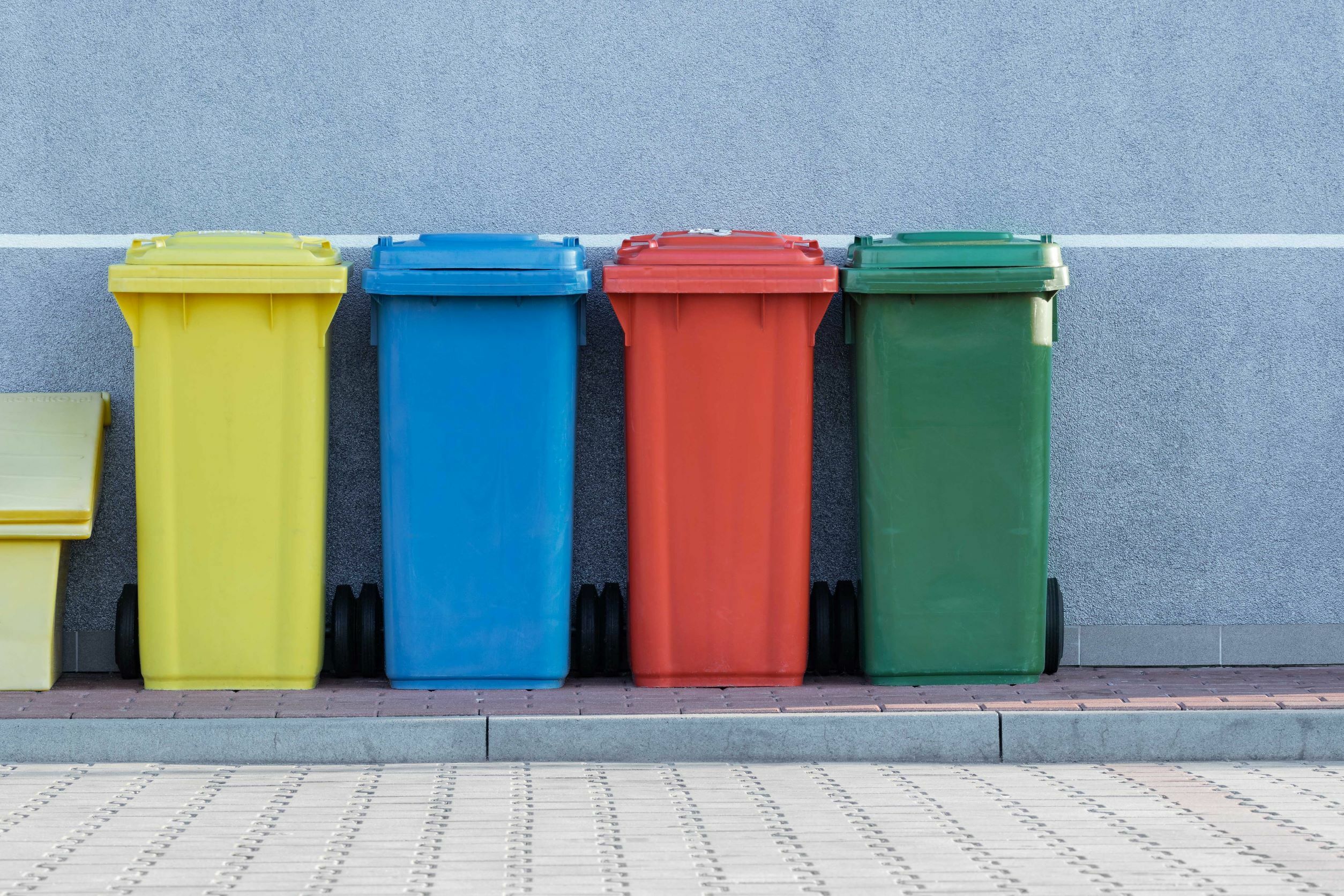 A clean sustainable economy is a mission that the majority of countries across the globe are trying to achieve. Typically, this is thought to be achieved through a shift towards renewable and clean energy resources and greater electrification of energy. An aspect that is sometimes overlooked is the importance of a shift towards a more circular, less wasteful economy. This encompasses utilizing resources more efficiently, improving durability and design of goods as well as creating more competent waste management systems.

In 2021, it was estimated that the world consumed almost double the resources that the Earth produces annually. A growing population, increased urbanization and our consumption driven economy will further exacerbate this with increased resource usage and more waste generated. The current consumption and waste patterns contribute to negative externalities including air and water pollution as well as societal health issues. The transition from the conventional linear economy toward a circular economy is critical in mitigating climate change and shifting towards a sustainable economy.

The Current Linear Economy – The Problem

The linear economy model has been the norm for over 200 years. It adopts a “take, make, use and dispose” approach. The inputs of production or the scarce raw materials, “take”, are transformed into products through manufacturing processes, “make”, and finally used and discarded by the end consumer, “use and dispose”. Not only is waste generated at the end of consumption, but it is also a by-product when converting raw materials into goods. This industrial waste takes many shapes and forms, including used oil, contaminated water, and greenhouse gases.

This existing linear framework continues to deplete the world’s finite resources and materials whilst producing a large amount of waste. This has various repercussions environmentally and socially. Approximately 70% of global waste ends up in a landfill, and 33% of total global waste is disposed of through open dumping. Both contributed 1.6 billion tonnes of carbon dioxide emissions in 2016, which is around 5% of total carbon dioxide generated in 2016. Open dumping is the illegal deposit of any waste onto land which is not licensed to accept waste. This is more prevalent in developing countries as there is a lack of proper waste management infrastructure. This is in stark contrast to developed countries, where almost all waste is collected. According to the World Bank, less than 50% of waste is collected in low-income countries’ urban areas. This drops further to 26% when the data is broken down and differentiated between urban and rural areas. 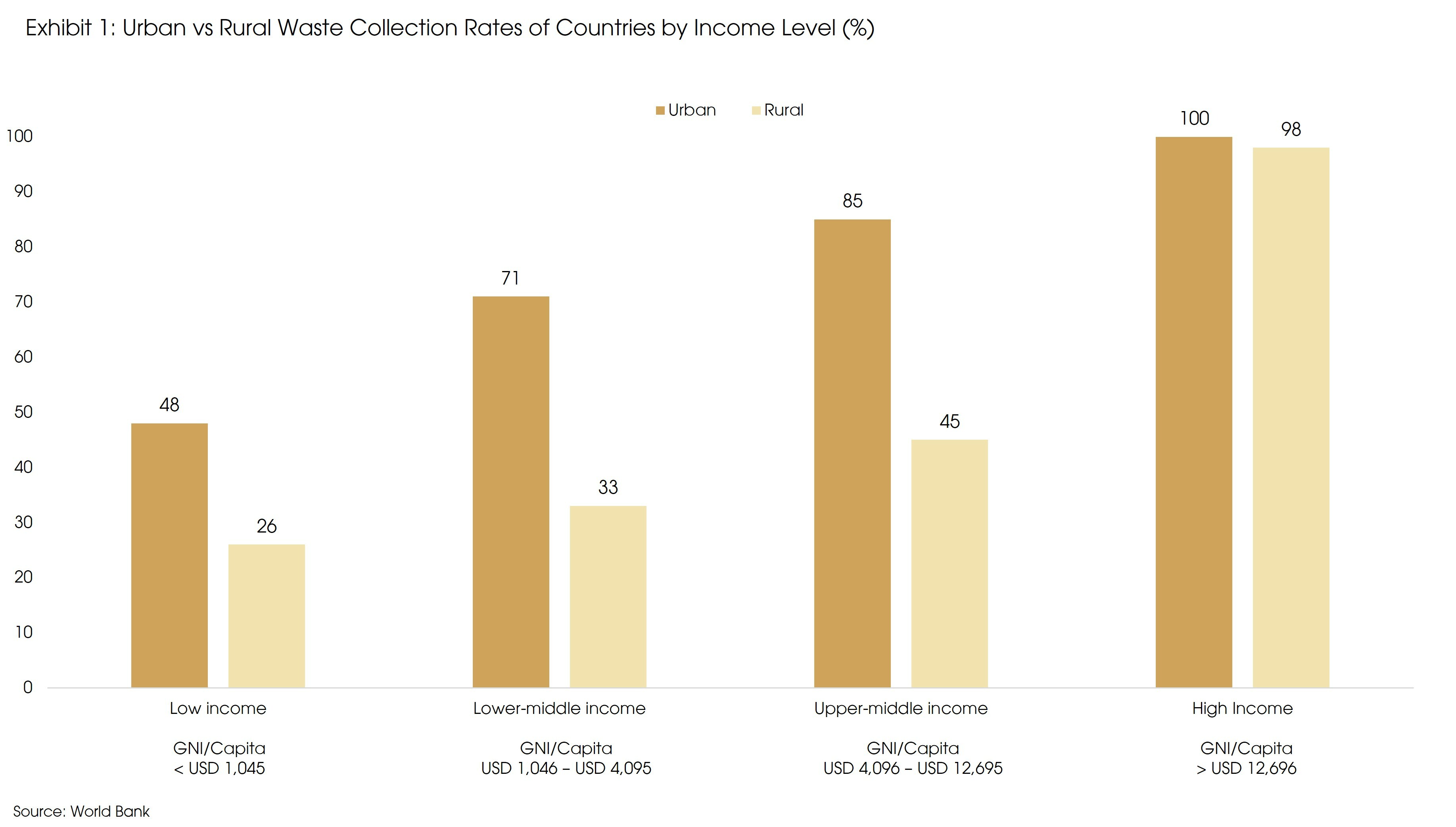 World Bank data estimates that we generate 2 billion tonnes of municipal solid waste annually. This is expected to increase by 70% in 2050, which to put into context, is double the forecasted population growth rate over the same period. As shown in exhibit 2 below, annual waste generation is expected to continue to grow across all regions. Most notably, the three developing regions: LATAM, Africa, and the Middle East as well as Southeast Asia & Pacific, are expected to experience the greatest growth. Southeast Asia & Pacific’s waste generation is already the highest among all regions in 2016 and is expected to grow by a further 71% by 2050. The Middle East & African region is expected to become the second-largest waste-generating region by 2050 with the highest expected growth rate of 155%. 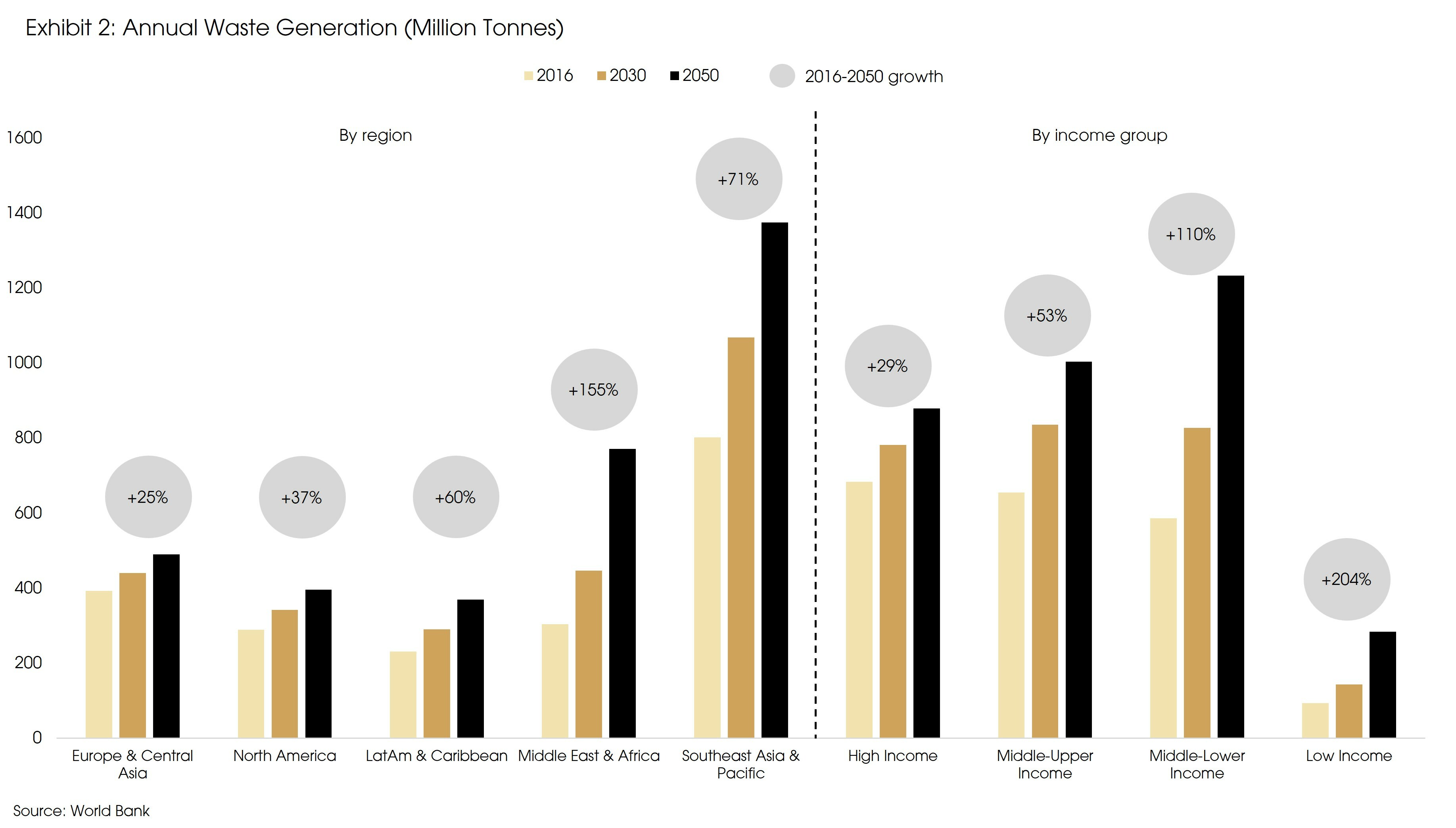 As has been highlighted, the current linear model is unsustainable. Increased consumption and urbanization rates will further pressure our already resource-constrained world. With these trends, waste generation will follow, which calls for action from policymakers, businesses, and individuals.

The Circular Economy – A Solution

Resource efficiency, waste reduction, and value creation from waste through restoration are pillars that underpin the concept of the circular economy. It seeks to ensure that resources are utilized to their maximum and minimize waste. These are enabled through actions such as recycling, remanufacturing, and reusing waste as secondary raw materials wherever possible (Exhibit 2). 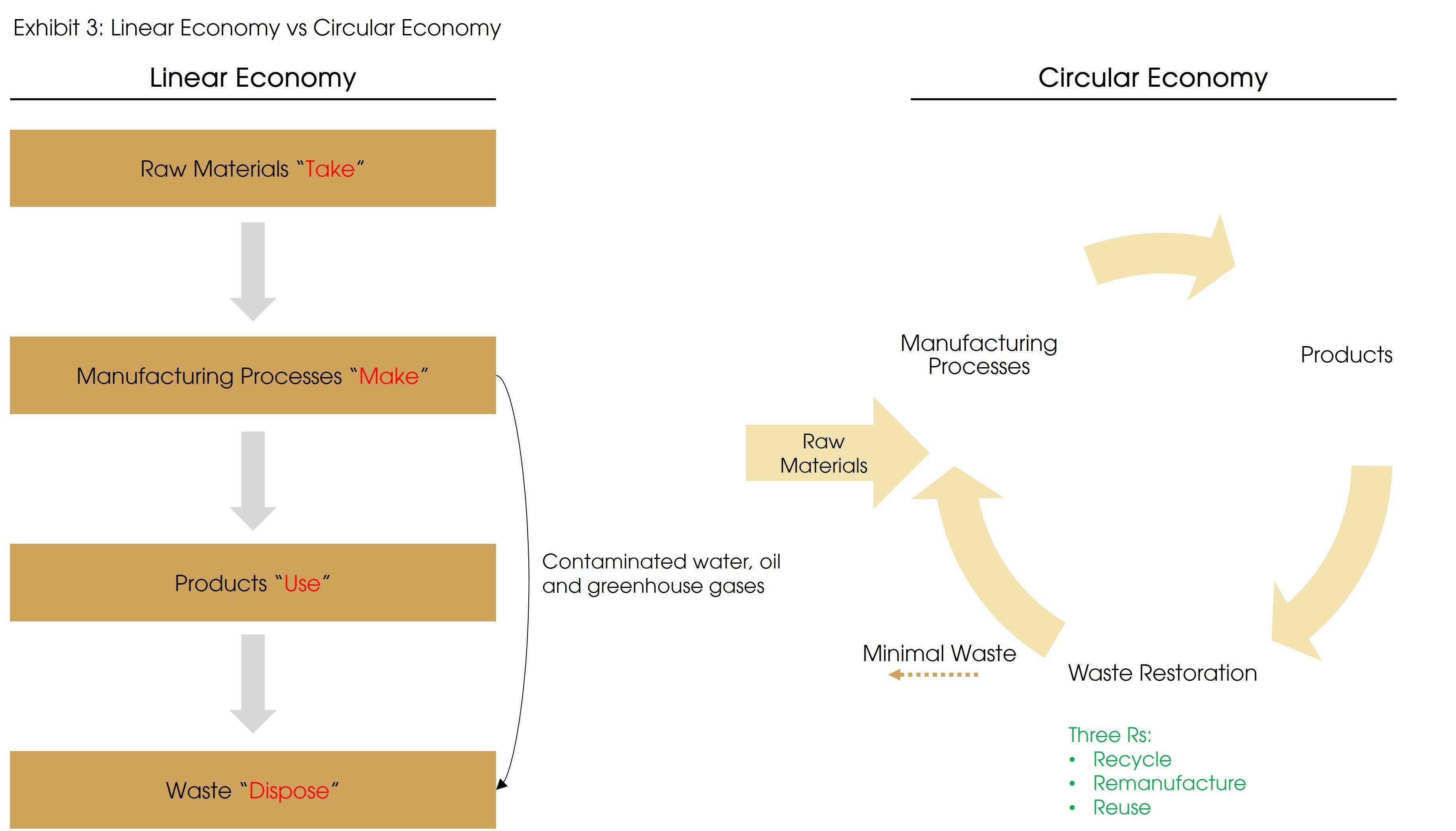 Adoption of a circular production model is expected to have significant economic benefits, besides reducing negative externalities. The World Economic Forum estimates that the implementation and adoption of circular-based initiatives can add USD 4.5 trillion in economic benefits by 2030 and USD 25 trillion by 2050. McKinsey estimates that Europe itself through the adoption of a circular economy should generate an additional EUR 1.8 trillion annually by 2030.

The adoption of circular production is applicable to different sectors for example in consumer goods and more broadly in technology. Global companies themselves have started to set targets for reducing waste and contamination of the environment. For example, Nestle has targeted that all their packaging will be recyclable or reusable by 2025.

Garments are one of the biggest components of global waste. On average, 35% of all materials in the supply chain end up as waste. The Global Fashion Agenda estimates that between 2000 and 2017, the average consumers now buy 60% more items of clothing and each garment is kept for half as long. 57% of all discarded clothing ends up in a landfill and 30% will be incinerated. As younger consumers are becoming aware of the detrimental effects of fast fashion and companies are taking note of the potential material cost savings from a circular production method, major fashion brands are increasingly incentivized to adopt this method. More and more apparel companies, such as Nike and H&M, are also investing in sustainable production that uses recycled materials. BCG forecasts that the fashion industry could save around USD 192 billion in costs by 2030 through the introduction of circularity.

As the world becomes more digitized, the amount of electronic waste being generated is increasing. Electronic waste, if disposed of incorrectly, can lead to societal health issues and issues to the ground soil due to toxic materials contained within them. The United Nations estimated that the potential value of raw materials in electronics waste was USD 57bn in 2019 and recycling rates across electronics are only 17%.

Technology, however, also plays a huge aspect in the circular economy, particularly by improving the efficiency of production and durability of products. For example, the advancements in renewable energy technology allow for more efficient use of space and materials through larger turbines generating greater amounts of electricity, hence reducing the number of turbines required. The innovation of ride-sharing apps contributes to reducing the number of cars on the road and hence emissions as well. The ability to use products for a longer period also plays a part in moving towards a less wasteful economy. For example, replacing a smartphone after 4 years instead of the typical 3 could prevent annual carbon emissions equivalent to Irelands’ annual emissions.

Europe has been leading on Circular Economy regulations. In July 2014 the European Commission first adopted a Circular Economy Package with a Resource Efficiency Roadmap. The package included a series of initiatives on waste, sustainable buildings, food systems, and others. Examples of specific initiatives include reaching an 85% recycling rate of paper and cardboard packaging by 2030 and limiting landfilling rates to 10% by 2035.

In March of 2022, the EU Commission, as part of the European Green Deal, released updates to their Circular Economy Action Plan designed to further boost circularity in business models. Some of the key proposals and initiatives are highlighted in the below exhibit. 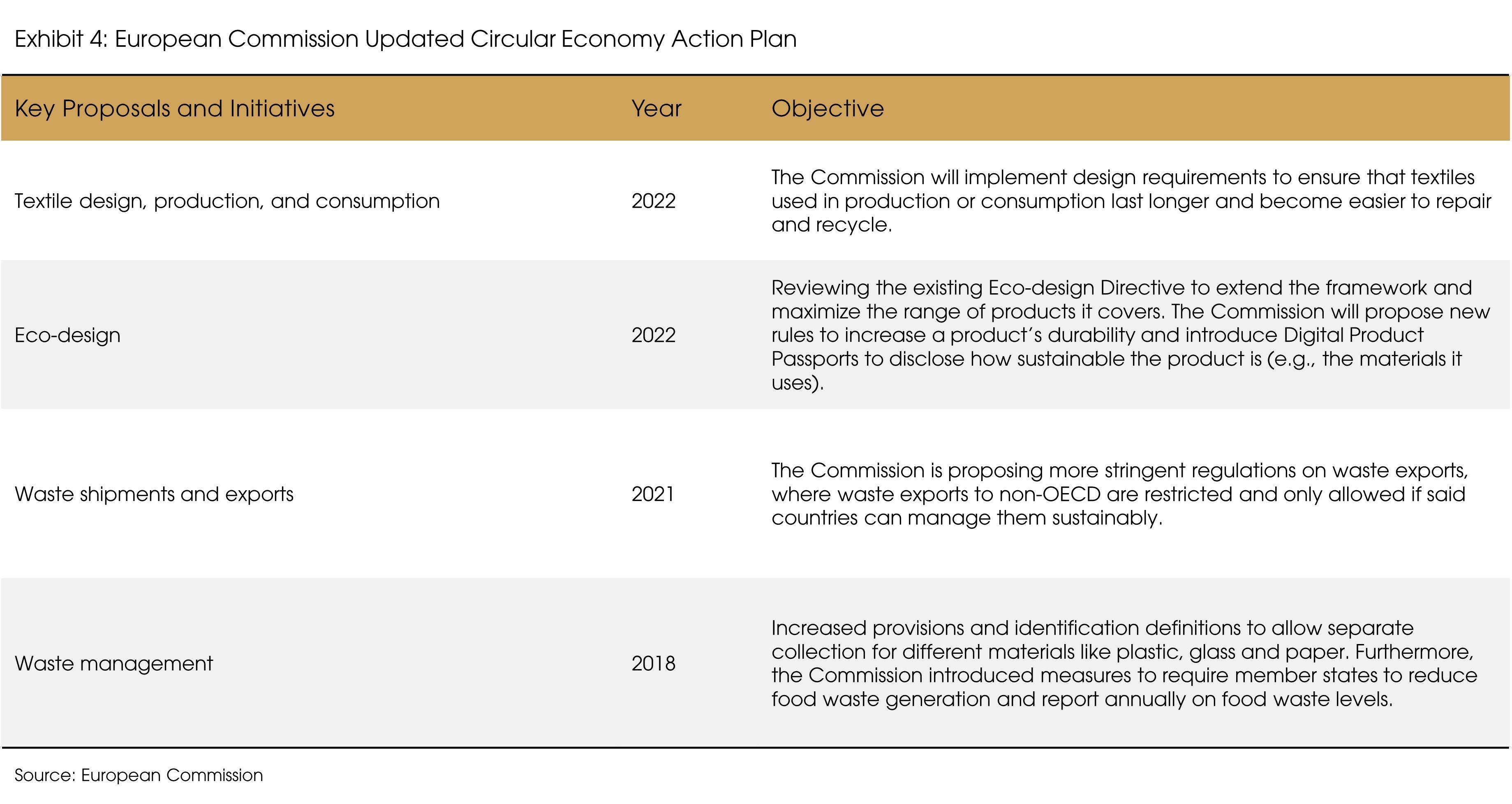 In the US, the Environmental Protection Agency (EPA) released a National Recycling Strategy in November 2021. This strategy is aligned with the National Recycling Goal which was set in 2020 to increase the recycling rate within the US to 50 percent by 2030. Some of the objectives laid out in this plan include: improving markets for recycling commodities, increasing collection and enhancing materials management infrastructure as well as reducing contamination in the recycled materials stream. The EPA plans to work with stakeholders in 2022 to develop a plan to implement the 2021 strategy and has committed to developing a new goal to reduce the climate impacts from materials use and consumption as well.

Another vital government policy that has contributed to increased investments into waste management in developed countries particularly, is the ‘National Sword’ Policy in China. This policy was introduced in 2018 and banned waste imports of 24 categories of recyclable materials. In 2019, China further increased this ban to 32 types of scrap materials. Prior to this ban, China imported and managed around 45% of the world’s waste, with North America and Europe making up the majority. Since China has come out with this policy, other developing countries have followed. Thailand and Malaysia both announced bans on imports of plastic scraps by 2021. Indonesia has also restricted imports of non-recyclable waste. This stance from developing countries will mean that developed countries have fewer options for diverting their waste. Instead, it should further drive the need for increased investments in local waste management infrastructure.

In recent years, investors have been increasingly prioritizing ESG and the companies’ impact on the environment to help guide their investment decisions. Given that there is no sustainable economy without waste management, this sector is prime to continue to be a key beneficiary of this trend.

The waste management sector itself though can be quite complex. This is due to almost all industries and sectors requiring these services, with each having its own sets of challenges and requirements. There are three main types of waste: municipal waste, commercial/industrial waste, and hazardous/specialty waste. Certain companies that can help manage all these types of waste, while others are more specialized. Broadly, the waste management companies can be categorized into four main segments as detailed in the exhibit below. 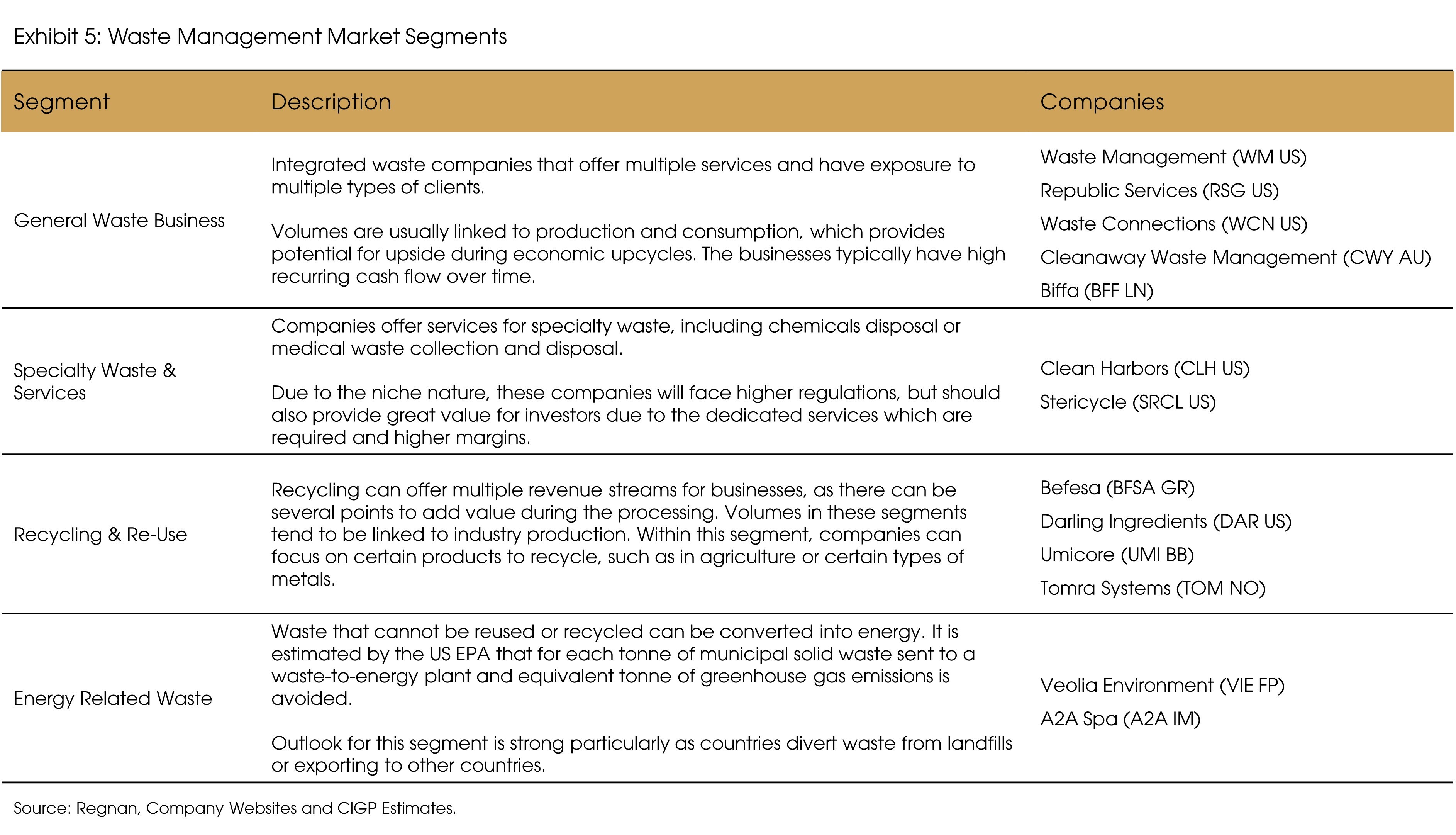 A benefit of waste companies is that they tend to exhibit strong fundamentals. The companies typically have steady revenue growth with strong recurring margins. Considering the current volatile market environment with rising interest rates, this should bode well for the segment. Moreover, with the structural tailwinds of continued and increasing waste generation, growing government and global companies’ policies, and actions for circular production, it is obvious to expect demand for waste management services to increase. Hence, leading waste management service companies should continue to grow.

Supply chain bottlenecks, rising volatile commodity prices, and supportive legislation will be driving the increased adoption of production-efficiency solutions. Reducing and improving the re-utilization of waste is directly correlated to the collective effort of society and corporations to move towards a decarbonized world. Therefore, proper waste management is integral in powering the shift and is where the circular economy comes to play. 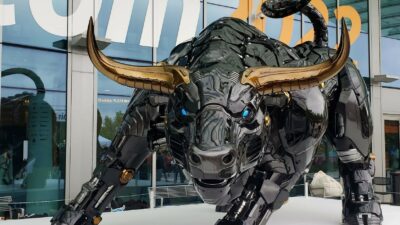 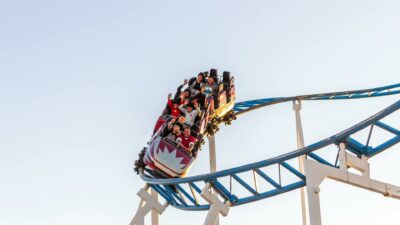